Baking pineapple tarts (PT) is a yearly affair, usually for Chinese Lunar New Year. And to kick-start the new year, I finally changed to a new oven. Bigger and with better functions. Bought a 42-litres TEO 3400 from Technogas. Got it at a sale price of S$129 (retail price: S$243) from Harvey Norman. It is alot alot bigger than my old oven. I took alot lesser time to bake compared to the past. I heard good reviews about this oven from my friends who're using this model, hence been waiting for my older oven to 'retire' before a new purchase can be made. J'adore ma nouvelle fours! C'est superbe et magnifique!

For this coming CNY, I decided to bake more PT for some relatives (as per mum's instructions), colleagues and my close friends. Thankfully, I have my mum to help me roll the pineapple jam fillings while I prepare the dough and wrap it with the jam balls. 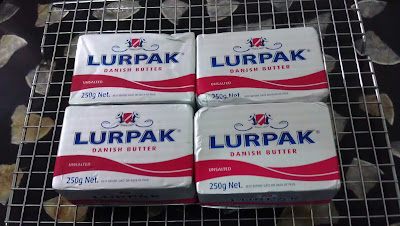 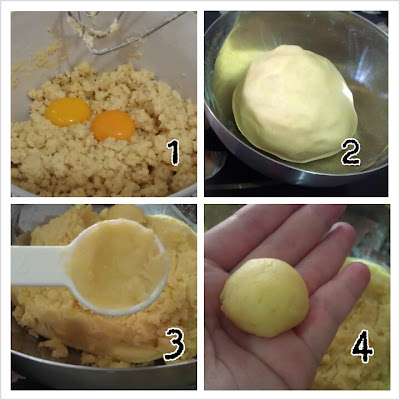 For the size of the pineapple jam balls below, I use half tablespoon to measure the dough before wrapping with it. 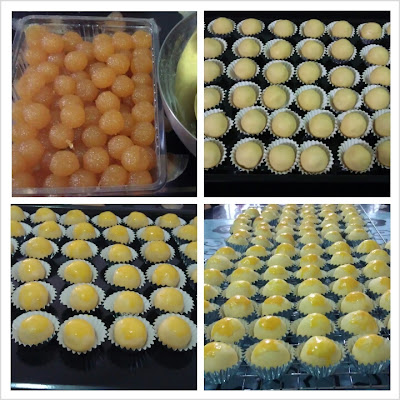 Glaze the tarts with egg yolk. I used a silicon pastry brush bought from IKEA. More hygienic too 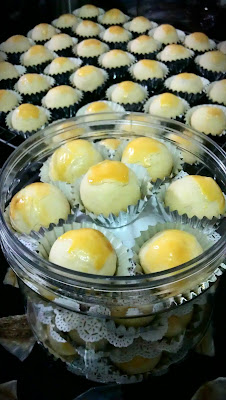 1. Pre-heat the oven at 150deg c. Cut the soften butter into cubes (for ease of mixing) and add to the mixing bowl. If you take the butter out from the fridge, the butter should be softened in 30-35 mins. Add the icing sugar to the butter and mix it until just incorporated.

2. Add (B) to (A) until it is incorporated. They will resemble like breadcrumbs. Next, add (C) and mix to form a dough.

3. For the dough, I based on my own estimation to gauge the amount of dough to wrap every single ball of PJ. I measured the dough using a measuring spoon, roll it into a ball, flatten it with my thumb. Then I placed a ball of PJ on the dough and wrap the former with the latter. After that, you glazed the top part of pineapple tart with egg yolk.