Recently, I was hooked on 'Junior Masterchef' program on tv. The contestants are kids aged between 8- 12 years old. Their culinary skills are superb! The show is very entertaining and less stressful compared to those adult cooking show. No screaming and drama scenes or sparring of angry words between the contestants. Of course not, they are just a group of innocent yet very talented kids. 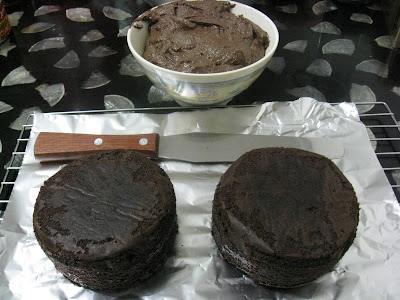 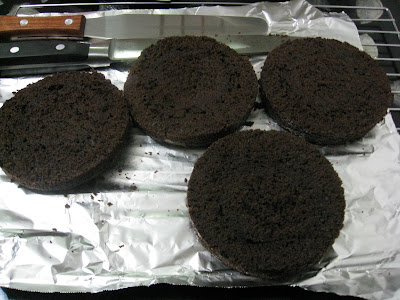 Had a crisis baking the chocolate batter. I used two 10cm round baking tin instead of 12 cm ones. I filled the tin almost to the rim with the batter. I guess most of you would have guessed what happened next. Yes, my batter overflowed during the baking process. It was like a minor eruption... lava-like molten chocolate oozed out from the baking tin. I should have known but I told myself maybe it won't happen. And it did. I wanted to bake again but I had no butter left at home. I wanted to save the cake. I really do. I used a knife and removed the 'ballooned' top portion of the half-baked cake and continued baking. Voila! My cakes are saved. They don't look pretty, at the very least I managed to cut 4 layers. I did damage control by placing blueberries on the top of the cake. I tried the some of the ruined cake, they tasted awesome. Donna Hay is simply awesome and her recipe is definitely a keeper!!! 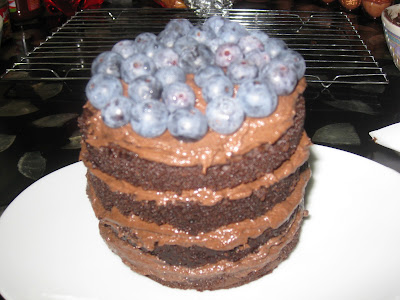 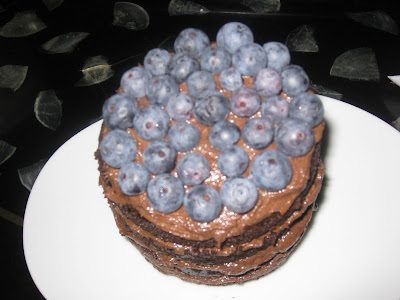 
2. Place the water, butter and cocoa in a saucepan over medium heat and stir until the butter has melted. Place the flour, bicarbonate of soda and sugar in a bowl, add the cocoa mixture and whisk to combine. Add the eggs, buttermilk and vanilla and whisk to combine. Divide mixture between 2 lightly greased 12cm round cake tins lined with non-stick baking paper. Bake for 40-45 minutes or until cooked when tested with a skewer. Allow to cool in the tins for 5 minutes. Turn out onto wire racks to cool completely.
3. While the cake is baking, make the cream cheese frosting. Place the butter and cheese in the bowl of an electric mixer and beat for 6–8 minutes or until pale and creamy. Add the icing sugar and cocoa and beat for a further 6–8 minutes or until light and fluffy.
4. To assemble, slice the cakes in half horizontally. Place one cake layer on a plate and spread with one quarter of the frosting. Repeat with remaining layers and frosting. Decorate as desired.
Posted by Corine at 12:31 PM

Rosita: This layer cake is really nice. Love the taste of it too. Thanks to Donna Hay. Hehe

This looks very pretty and delicious too :).

Wow, this cake looks fabulous, love the idea of 4 tier...so pretty :-) Hope you have a great week ahead Corine!

Thank you Juliana! Yeah, 4-tier layer cake is cute. Thank you for dropping by too. :)

You have a fantastic week ahead! :)