Made New York Cheesecake at the request of my friend, K as his wife loves them. Constant baking made me rather broke. I find that baking can be an expensive hobby if you bake very often. I swear by certain brands for some key ingredients of my bakes. I learned my baking mistakes through trial and error or EOI (exchange of information, nothing to do with OECD if one may wonder) among friends who love baking like me. Anyways, K decided to sponsor the cream cheese for the cheesecake. Thank you, K. 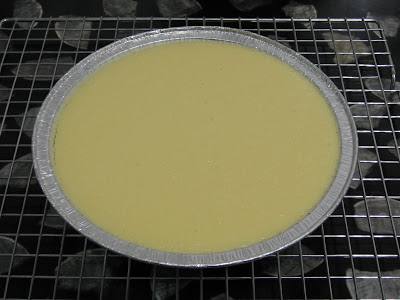 Going through the cookbooks I have in my possession, I found the NY Cheesecake recipe from Marcus Wareing. 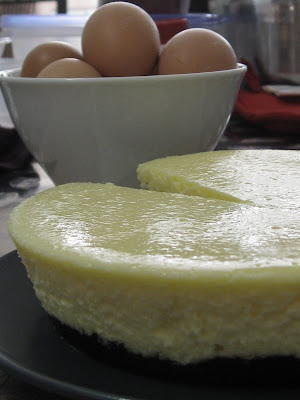 Mix the melted butter with crushed oreo biscuits. Press firmly over the bottom of the springform pan (23 x 8cm). I used 2 disposable aluminium pie tray (base diameter 14cm).
.
Put the cream cheese in the mixing bowl. Add the sugar, cream, cornstarch and the eggs and beat together until smooth. Pour the mixture over the oreo base.

Bake the cheesecake for 1hr 30mins in the oven until just set but still wobble in the centre. Let cool to room temperature before removing the sides of the pan. 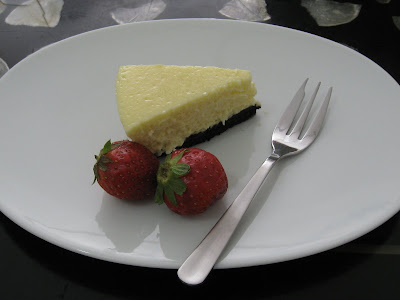 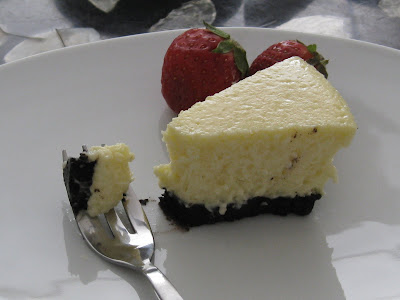 Mmmmmm Today, I've been craving cheesecake all day! Maybe I should've gotten some. :) Your cheesecake look so smooth and creamy!

Sook: Go and satisfy your craving! ;)A serving of cheesecake for dessert after dinner will be spendid.

Firstly, I want to thank Corine sis for the free cheesecake! Enjoyed it after my dinner 2 days back.

Corine had surprised me in the morning that work-day with an sms to inform me that I'd be expecting some cheesecake that day. Well Corine and I coincidentally landed brand new positions for 2 brand new employers in a not-so-brand new office building. So at lunch time, I received a call from her and went to the lift lobby to meet her. There she was with my cheesecake, as promised, wrapped in a sheet of aluminium foil within a box.

I carefully placed the slice of cheesecake in the pantry fridge immediately. Truthfully, I was a little worried about someone else helping him/herself to the cake, since I hadn't put any label on the box. Then again, it wasn't like my new colleagues looked like the yao-gui type, so I dismissed the thought and carried on with my lunch, and subsequently my work.

About 3 plus in the afternoon, it was tea-time. I was so tempted to retrieve my cheesecake slice from the pantry fridge and gobble some of it, but I tahan-ed the urge.

Finally when I got home that evening, I refrigerated the cake for about 2 hours so it would be nice and chilled, and got ready to devour the thing.

When I unwrapped the aluminium foil and revealed the cheesecake, a nice cheesy smell greeted me. I said "hello there" back to it, and slowly raised my fork to a strategic position.

With no warning, I plunged the fork into the middle of the cake (where you could call the 'belly' of the cake) and niftily slanted the fork and cut it into 2 large pieces.

The cheesecake laid motionless on the plate, as it watched me put back one large piece into the plastic box.

Then as I proceeded to raise my fork once more, I swear I heard a small voice screaming in horror....

And then I ate it. Yum yum.

All in all the flavour was what I like in a NY cheesecake. I love cheese so I really liked the strong cheesy taste. The sweetness is just alright as well, and I savoured a hint of citrus - which I confirmed with Corine to be lemon zest. The lemon zest is a subtle highlight in the cheesecake, upping the 'appetising' and making it refreshing to eat. Summary is, flavour is yumyum.

In my humble opinion, I think the texture of the cheese on top can be improved. The texture, as I observed from the slow savouring of the cheesy-creamy layer, had small lumps of cheese within. Not a baking expert so I'm not sure what the lumps are, but I believe they should be the inconsistency in the cheese causing the lumps. I have another thinking that the lumps may have been caused by the air bubbles in the cheesy-creamy layer when setting? Coz like you can see in the pictures, there are small pot-holes in the surface of the cheesecake. Time for a facial. So if there's anything improvable about the cheesecake, I think there is just this one area to work on.

This concludes my super long and trashy comment. I want to add in a disclaimer that although the front part of the comment may be so trashy, the subsequent review part is serious-time. I am totally serious about that, no nonsense ok.

I wonder if all the above had hit the 2000 word limit?

Haha... that was a super duper long comment.The first and most likely the last lengthy comment. :) Probably I didn't beat the cream cheese long enough, hence the lumps. Whether the air bubbles have anything to do with the lumps, I have to find out. Thanks for the feedback. :P